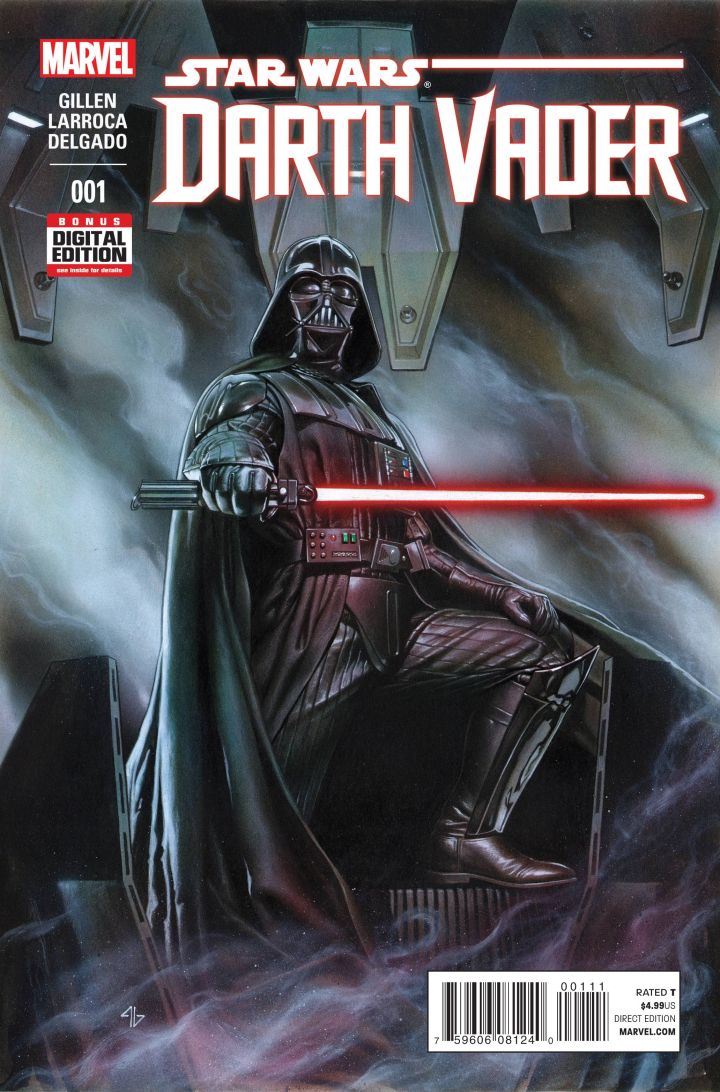 Darth Vader #1 will be released on Wednesday, February 11.

Darth Vader is one of the most iconic villains in all of pop culture, to say nothing of the Star Wars franchise itself. He’s a character at once supremely terrifying and profoundly tragic – a promising young warrior brought low by his own fear and doubt and anger and perverted into something inhuman and evil. Bearing all that in mind, it’s surprising that so little Expanded Universe material has focused directly on a post-Episode III Anakin Skywalker. Even those projects that do purport to star Vader often wind up devoting more attention to the Rebels or Jedi Vader is hunting or the hapless Imperial soldiers under his command. After all these years, it seems as though the Dark Lord of the Sith is a figure better kept to the periphery of the Star Wars franchise.

Not so with Marvel’s new Darth Vader comic. Vader is very much the central protagonist of Marvel’s second ongoing Star Wars comic, as writer Kieron Gillen and artist Salvador Larroca explore his role in the galaxy following the events of Episode IV and the destruction of the first Death Star. And while Marvel’s core Star Wars comic has gotten off to a perfectly respectable start, Darth Vader #1 is a superior read.

Gillen was a wise choice to helm the series. Not because I’m looking forward to any scenes of Vader rocking out to Brit-pop (though I wouldn’t say no to that), but because of Gillen’s talent for writing iconic villains in a unique and sympathetic light. His Journey Into Mystery run was phenomenal. This is a very different comic for all sorts of reasons, but there’s already the kernel of something great here. Gillen manages to walk the delicate line when it comes to portraying Vader. He’s definitely the imposing, frightening figure he was in the Original Trilogy. Gillen immediately sets about reminding readers why Vader was such a dreaded figure with in his heyday as the villain intimidates others and unleashes both lightsaber and Force abilities.

At the same time, there’s an inkling of the trauma and anger motivating the villain. This comic opens during a low point for Vader, as his failures at Yavin IV and other recent battles have cost the Empire a vital super-weapon, countless troops and officers, and the ability to enforce Emperor Palpatine’s rule. One of the best scenes in this issue sees Palpatine berating Vader for his mistakes. This is a villain with much to prove, even as he begins wrestling with the mystery of Obi-Wan’s young apprentice. Gillen captures all of this with subtlety. Like Jason Aaron’s Star Wars (to which this series is loosely intertwined), there’s no internal monologue or narration at work. Everything is conveyed purely through dialogue and visuals. This approach has really helped give these comics a more cinematic tone that brings them closer to the old films in a way many Expanded Universe comics haven’t achieved over the years.

It’s an approach that especially suits Vader. He’s a villain that needs to remain aloof and distant to a certain extent. We don’t want some tortured monologue revealing his innermost thoughts as he mows down his enemies. Yet he can’t be a purely visceral presence and still remain the book’s protagonist. Gillen is able to keep Vader’s shame and rage and ambition at the forefront. At one point Gillen even touches on his life as Anakin Skywalker in a very arresting image that truly does speak a thousand words.

Readers not well-versed in Star Wars outside the films will still find a lot to draw their attention in this issue. Gillen packs in a number of familiar faces on both the Imperial and “scum and villainy” fronts. This first issue parallels one of the OT films very closely in location and subject matter. But that’s not to say Gillen spends all his time rehashing old beats, There are new characters and conflicts introduced in this issue. The result is a book that crams in a lot of what fans love about Star Wars while also building the foundation for something new and unexpected.

Marvel was equally wise to select Larroca for this challenging assignment. Star Wars comics, especially those set during the period of the films, are tricky beasts. You have actor likenesses, costume designs, and detailed technology and architecture that have to be replicated without sacrificing basic storytelling elements. I can tell you first-hand from my days of scribbling in notebooks that Darth Vader’s helmet is a huge challenge to render in two dimensions. Even Cassaday has shown some issues recreating that shape in his Star Wars work so far. Apparently Larroca doesn’t have the same problem. His Vader might as well have crawled right off the screen. And sure, there’s a fair amount of obvious photo-referencing at work in this issue, but it all enhances the story and the cinematic tone of the comic rather than detracting from it. If you want to be incredibly nitpicky, you could point out that Larroca and cover artist Adi Granov render Vader as he appeared in Episode V rather than Episode IV, but does that really matter?

Larroca’s work has often been frustrating in recent years. Comics like Invincible Iron Man showcase Larroca’s fine storytelling abilities and knack for choreography, but also suffer from loosely defined figures. Perhaps Larroca being paired with colorist Edgar Delgado has caused him to change his approach, because this issue boasts a much higher level of detail than we’ve seen from Larroca in the past. Figures are more defined, more shaded, and more fully realized. Delgado’s colors enhance Larroca’s line-work and contribute that much more towards replicating the tone of the movies. Both TBS COMICS Fort Walton Beach & Pensacola will have these available Wednesday, Feb 11th.  The Comic book store of choice on the Emerald Coast. 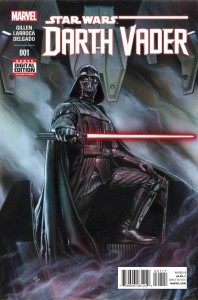