New York City Comic-Con kicked off, and Marvel stole the show that evening when they announced their next big comic book event: Secret Wars! No, you’re not suddenly back in the 1980s. Marvel is naming its year-long 2015 project after the beloved 1985 miniseries, which saw many of Marvel’s heroes and villains engaged in a grand-scale cosmic battle. The New Secret Wars is described as “overwhelmingly huge,” and Marvel Senior VP of Publishing Tom Brevoort said it is “the craziest thing that I’ve dealt with.” Considering that most comic book events label itself as the biggest thing ever, we’ll have to wait until 2015 to see if Secret Wars measures up, but there are already clues that this cosmic scale event is more than it seems.

Before the event was revealed, many fans were expecting Marvel to announce something concerning the Marvel Cinematic Universe, so Secret Wars came as somewhat of a surprise. Granted, comic book companies often make a big deal about their crossovers and events, but to announce an event in such grandiose style at one of the world’s biggest comic book conventions in the world shows that Marvel considers this to be one of their biggest endeavors, and maybe we should believe them. Going off the information and teaser image they provided us, there are clues that Secret Wars may play a role in the future of the MCU.

The Storyline Has Been Hinted At Before
Joe Russo, one half of the Captain America: The Winter Soldier directing team, mentioned that Secret Wars was one of his favorite comic books growing up, and would love to see those characters on screen together. Captain America 3 is set to keep the same grounded tone The Winter Soldier had, so other than a possible visit from Hawkeye, it’s unlikely other Marvel superheroes will show up (not including the post-credits scene). However, that’s not to say that the movie won’t set up something big for the movie. Kevin Feige has had a Cap 3 title in his head for years, and the story “is all part of a bigger plan.” Perhaps Secret Wars will be the inspiration for the gigantic battle that the MCU is edging towards, and Cap 3 is the prologue to that story. Other movies will be released between Cap 3 and Avengers 3 (or whatever Marvel’s grand-scale movie will be called), but to grasp what sort of Secret Wars-style conflict we’re heading towards, Cap 3 is one of the crucial pieces of the puzzle.

TBS COMICS will have everything to do with secret wars including the Free Comic Book Day Special #1 available May 2nd. 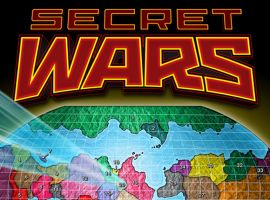