TBS COMICS Pensacola, FL will play host to it’s own Warhammer 40k Ard Boyz Tournament with $200 in prizes up for grabs.  This Saturday, August 17th @ 2pm. 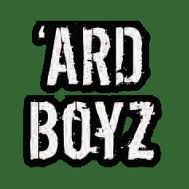