Take your favorite fantasy RPG to the stars! Set thousands of years in Pathfinder’s future, Starfinder is a stand-alone roleplaying game evolved from the Pathfinder rules and designed to bring you a whole new universe of science fantasy adventures. Play alien races both new and familiar as you explore the mysteries of a weird galaxy. Will you be an android assassin fulfilling corporate contracts, or a plucky ratfolk mechanic? A spellhacking lashunta technomancer, or a rakish human pilot? Uncountable worlds are waiting for you and your intrepid crew!

The Starfinder line will include both a hardcover core rulebook and key hardcover rules supplements, as well as a Starfinder Adventure Path that provides you with epic campaigns, expanded rules elements, and new monsters to battle. Best of all, Starfinder is designed to integrate easily with the Pathfinder roleplaying game, meaning your power-armored marine can still go toe to toe with orcs and dragons. So what are you waiting for? The galaxy needs you! 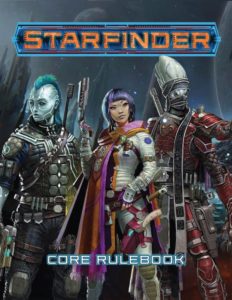 Previous Post: « That Back Issue Sale Thing is Happening!
Next Post: TBS Sells Sports Cards in Both Locations