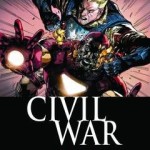 The Civil War storyline will be featured in Secret Wars where it will have its own mini-series. Its location on Battleworld is referred to as the Warzone. The Civil War never ended. Welcome to the Warzone, where six years of non-stop battle between the forces of the Blue and the Iron have split the nation down its center, utterly transforming it. In a world of new alliances and strange enemies, President Tony Stark and General Steve Rogers meet to make one last attempt at peace. Introducing the next Civil War comic series. Issue #1 of the mini-series comes out 7/8/15!