It’s called The Dark Knight III: The Master Race.
Um.
Besides the name, we don’t know much about DK3. There’s speculation that it’ll be about Carrie Kelly in the future, possibly in a Batman Beyond sort of role with Bruce as a retired mentor — we simply don’t yet know — but it’s called The Master Race.
I am in no way accusing Frank Miller of anything remotely supporting the darker connotations of that phrase — whether referring to race or PC gaming — and I’m not reading into his intentions or personal politics. This isn’t about political correctness. This is about Frank Miller’s unique style.
He isn’t exactly subtle. I can think of two or three different Miller comics with scenes involving a topless skinhead-criminal-mercenary woman with swastika pasties. This could be seen as a microcosm into what his comic book style has become. The whole Nazi thing is powerful imagery that can easily mark a given character as someone unequivocally evil and who will receive some righteous justice. It’s not unique to Frank, even if the Nazi nipples are pretty uniquely his.
Frank Miller planned another Batman book after Dark Knight Strikes Again and around the same time as his All-Star Batman and Robin (which also had Frank’s distinct lack of subtlety in spades) called Holy Terror, Batman! It floundered for a bit until DC dropped the project. Miller turned it into Holy Terror, a story with paper-thin Batman and Catwoman analogs fighting Muslim terrorists. They’re also assisted by an ex-Mossad vigilante with a Star of David on his face who was kicked out of Mossad for being too badass and is flanked by two Asian women as his assistants. Frank Miller is not subtle.
Holy Terror wasn’t good. It was a narrative mess of caricatures duking it out in a nearly monochrome art style that made action, settings, and characters completely indistinct. It was like Dark Knight Strikes Again and Sin City performed a fusion dance wrong.
Frank Miller is a very polarizing figure. The Dark Knight Returns is an incredibly beloved and important Batman book, and his Batman: Year One was very well-received. In the last 20 years, though, the Batman he’s written has varied from creepy, obsessive loner to creepy, obsessive loner in a story DC wouldn’t even touch. If DKIII has the subtitle The Master Race? Putting shades of Nazi imagery into the very title doesn’t really start things off on the right foot as a good Batman story. No one expects Frank Miller to be subtle, but starting right out of the gate with that name is not the best sign.

Stop by your favorite local comic book store (TBS COMICS) and grab a piece of history!! 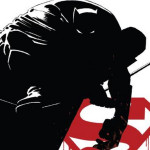