The previous volume of Invincible Iron Man started out as one of the most promising pieces of the the All-New, All-Different Marvel relaunch last year, but the series quickly lost its way after its first story arc. Maybe it didn’t need a full-fledged relaunch and status quo change to get back on track, but clearly something needed to be done to move the series out of the rut it’s been in for most of 2016. This new series looks as though it’ll do the trick.

If you haven’t heard by now, the big selling point of the new Invincible Iron Man is that it features teen genius Riri Williams, rather than Tony Stark, in the lead role. The series picks up in the aftermath of Civil War II, with Tony’s fate uncertain and Riri eager to prove herself as the new Iron Man. That element of the book is fine, but it plays pretty much like any other “teen superhero on their first solo mission” adventure you’ve seen. If that’s all this issue had to offer, the new series might be on shaky ground starting off.

Luckily, that’s not the case. Bendis devotes a good portion of this issue to exploring Riri’s origin story, as it were. While she appeared in several chapters of the previous series, readers were never given much insight into her background and family life. Here, Bendis visits Riri at several key points in her childhood, exploring the difficulties she faced as an exceptionally gifted young girl in a world of boring, ordinary people. As these flashbacks unfold, she struggles with the need to make friends, her occasionally overbearing parents and the tragedy that will come to define her as a teenage heroine. It makes for a strong character study, and it’s clear Bendis has put a lot of thought into his new character and what sets her apart from the rest of Marvel’s teen heroes. And if readers weren’t sold on Riri yet, this issue might change their minds. 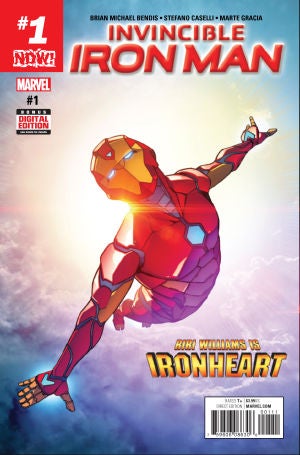 The previous volume’s storytelling woes were largely visual, as the shift from David Marquez’s bright, expressive style to Mike Deodato’s stiff, gloomy work was a hard pill to swallow. New artist Stefano Caselli brings the series much more in line with the Marquez issues. Caselli is nearly as gifted as Marquez when it comes to depicting vibrant figures with wide emotional range. Whether Riri is shown tinkering in her garage or relishing her time inside her suit, Caselli’s facial work is always a delight. That, plus his talent for crafting dynamic action scenes makes him an ideal fit for the book.

The coloring does leave a bit to be desired, and that’s the one area where the new series doesn’t quite measure up to those early Marquez/Justin Ponsor issues. Marte Gracia’s colors feel a bit unnatural, with too much contrast between light and dark areas and an overly smooth, artificial quality to many faces. In general, Gracia doesn’t seem to complement Caselli’s work as well as someone like Sunny Gho. 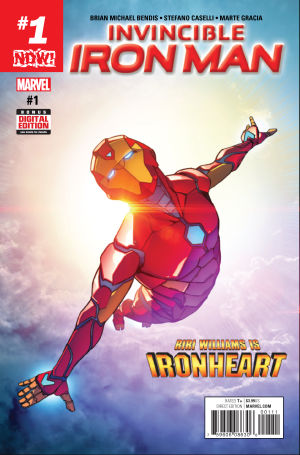