You are here: / Comics / DC Comics Rebirth in full swing this Summer @ TBS

The New 52 played an important role in reshaping the tone and direction of DC Comics, and in bringing a new wave of readers to the publisher at a time when sales were slumping to dangerously low levels. All that being said, many mistakes were made over the course of the New 52’s five-year existence. Some might even argue it fundamentally damaged the DC brand. The goal with the DC Rebirth relaunch is to polish this superhero universe, bring back some of those vital elements that have been missing lately and generally remind readers why they love the DCU in the first place. Beneath all the mind-bending plot twists and shake-ups, this one-shot succeeds because it focuses so much on what makes Geoff Johns’ comics special – passion, emotion and big character moments.

As many readers speculated, this entire issue is presented from the viewpoint of Wally West. Not the controversial New 52 Wally West, but the pre-Flashpoint Wally West who became so synonymous with Johns thanks to the writer’s hugely influential Flash run in the early 2000’s. In many ways, Wally is the only character who could have starred in a comic like this. He embodies what DC lost with the shift to the New 52 – that sense of hope and optimism and also the idea of superhero legacies being passed down from one generation to the next. The simple fact of his return is an immediate source of comfort and a sign that things really are changing for the better.

Moreover, it becomes clear within a handful of panels that Wally is really a vector by which Johns can address the reader directly. Lines like, “I love this world, but something is missing,” could just as easily be coming directly from Johns’ mouth. There’s a very personal, self-reflective quality to the script. As the story unfolds and Wally takes stock of a universe he barely recognizes, Johns is himself able to take a long, hard, often critical look at the New 52 universe. At times the book is surprisingly candid about acknowledging where mistakes have been made and where characters like Green Arrow, Black Canary and the Teen Titans have become diminished over time.

That’s not to say DCU Rebirth #1 is a mea culpa. This comic isn’t about begging readers for forgiveness and hitting a reset button that drags the universe back to its circa-2010 status quo. There’s not even really any continuity pruning at work. Johns goes out of his way here to reflect the fact that everything in the New 52 still happened and won’t simply be wiped away with the wave of a hand. He even finds a way to reconcile the existence of both versions of Wally West. Which, frankly, seems like more trouble than it’s worth, but it’s all part of the idea that every character matters and nothing in this massive universe deserves to be discarded or abandoned.

The goal with this issue is simply to acknowledge what’s gone wrong and make it clear that better days are ahead. There’s a profound sense of regret to many early scenes as Wally laments the relationships that have been lost, but also one of joy as those relationships begin to blossom again in a new form. Aside from chronicling Wally’s return to the DCU, this issue also includes a number of vignettes and interludes that establish new status quos for everyone from Blue Beetle to the Atom to the Justice Society. Many of these interludes function as perfectly enjoyable tales in their own right.The Blue Beetle segment in particular is infectiously cheerful. When is the last time any DC comic has featured so many smiling faces? This issue inspires joy in the reader in a way that, lately, only out-of-continuity books like Superman: American Alien have seemed capable.

It certainly helps that Johns has such a tremendous art team to rely on in this issue. Rebirth #1 is a basically a jam-fest between Johns and the four artists who have helped shape and refine his vision more than any other – Ethan Van Sciver, Gary Frank, Phil Jimenez and Ivan Reis. The simple fact that DC is selling a comic with nearly 70 pages of story from that creative lineup for a mere $2.99 renders this purchase a no-brainer. How can you go wrong with that formula?

Each of the four artists have their own distinct styles, certainly, but Rebirth fits together very well as a cohesive visual package. For one thing, the book is divided into several distinct chapters. But more importantly, each of the four artists has a very cinematic, detail-oriented approach to the page. More than his encyclopedic knowledge of continuity, Johns’ writing works as well as it does because there’s a very precise quality to his story pacing and the way he draws out the big emotional beats and action sequences to achieve maximum impact. All four artists understand that pacing and structure their pages accordingly. Both Frank and Van Sciver in particularly are great about heightening the emotion of Johns’ script through their intricate facial work. Readers can feel Wally’s pain when he’s unable to reconnect with his wife, Linda. They’re won over by Ted Kord’s beaming smile as he confronts a new challenge. They sense the empty loneliness felt by Oliver Queen and Dinah Lance as they each sit alone and ruminate over the strange, indefinable absence in their life.

The colors help lend an extra touch of consistency to the story. The majority of the book is colored by either Hi-Fi or Brad Anderson, and they both bring a vivid, dynamic quality to the page that always complements the tone of the script. The Blue Beetle sequence is bathed in the warm glow of daylight. As Batman broods in his cave, the page becomes moody and claustrophobic. The colors are especially crucial whenever it comes to rendering the the crackling energy of the Speed Force, which in this issue is an ever-present field threatening to consume Wally at any moment.

The storytelling precision also extends to the sheer amount of information Johns has to convey to readers. Johns is able to wade through incredible amounts of DC continuity over the course of these 66 pages without ever allowing the script to become bogged down in pointless details. It’s dense, but not dull or plodding. It will be interesting to see the general reaction to the book and whether casual DC fans will respond to the story in the same way hardcore DC readers do. Will Rebirth be difficult to understand and process for those whose main exposure to DC comes from movie theaters and TV screens? Will that same sense of tragedy and renewed hope be conveyed to newer readers?

The answer to the second question, at least, is likely a firm “Yes.” It really boils down to the way the fourth and final chapter wraps up the story. Whereas Wally spends much of the issue as a helpless observer of a universe gone sour, the final chapter sees him make his last, desperate stand to return to the land of the living and warn his friends about the evil that awaits them. You don’t have to be familiar with Wally’s life and relationship to Barry to appreciate the emotional roller coaster that is their reunion. It’s a beautiful tribute to their brotherly relationship and Wally’s heroic spirit. That climactic scene ranks among the very best Johns has written in his long tenure at DC. And now that we know Rebirth is his swan song at DC (for now, at least), it’s satisfying to see him end on such a high note.

Before wrapping up, it’s important to address the biggest revelation in these pages – the idea that the New 52 was the result of Watchmen’s Doctor Manhattan playing god with the DC Universe. It’s easy to dismiss this twist as a case of DC opting for shock value and tarnishing a hallowed franchise for the sake of making headlines and selling more comics. And it certainly will make headlines and sell more comics. But in this case, context is truly everything. For one thing, this reveal offers a concrete explanation for why the DCU changed and how it’s possible that the pre-Flashpoint universe and the New 52 are still two sides of the same coin. These are the same characters we’ve always known, just altered by an outside force and now given a fighting chance to reclaim what they lost.

Above all, Rebirth is about the notion that the DCU must rediscover the hope and optimism that once defined it. Its characters have become cold and heartless, much like the wave of grim and gritty anti-heroes that Watchmen spawned. Rebirth offers DC’s heroes a chance to be better, while at the same time making Doctor Manhattan the face of everything they should and must stand against. It’s not that Manhattan is being positioned as a villain in the traditional sense, but that he embodies a darker, more cynical form of storytelling that’s become far too prevalent over the years. As much as Rebirth is Johns’ farewell to the DC Universe, it’s also very much the beginning of an ongoing story about these characters confronting this looming threat and reclaiming their destinies.
The Verdict

For all the great stories that came out of the New 52, there was always something about this version of the DC Universe that didn’t sit right. DC Rebirth manages to break the fourth wall and turn that idea into a story. This one-shot is a wonderful showcase for what this universe can be when it’s executed properly. It’s both a fitting farewell for Johns and a worthy template for DC’s new wave of comics to follow. Reading Rebirth feels like coming home again.
Amazing
DC Universe Rebirth #1 is a return to form for this superhero universe and a worthy farewell for Geoff Johns.
Jesse Schedeen 20 May 2016

this article was taken from IGN.com 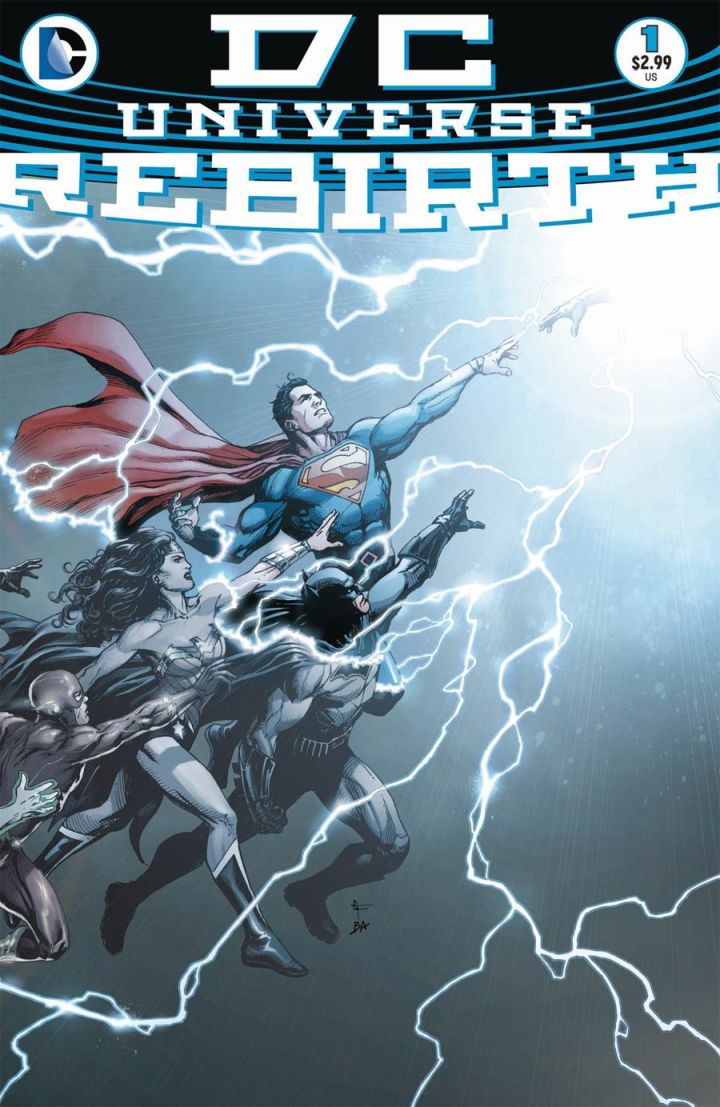